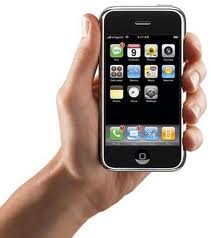 Recently my cellphone contract expired, which gave Ruth and I the opportunity to succumb to techno-lust and buy ourselves smartphones.  For days, we (mostly I) dithered between the iPhone and an Android phone, but in the end, we went with the iPhone.  The iPhone 4 has well-known antenna issues and can’t be used for tethering unless you jailbreak it, but we decided that we preferred to trust Apple to make the phone “just work” instead of  trusting Verizon or Sprint.  We haven’t had any signal issues with our old AT&T 3G phones, so we’re hoping coverage won’t be an issue.

The iPhone can transfer data over both WiFi and the 3G cellular network.  WiFi is preferable when it’s available because it’s faster and doesn’t count against the 2GB monthly cap on our AT&T 3G data plan.  Unfortunately, when we connected via WiFi at home, our phones would intermittently stop transferring data.  The little activity symbols kept spinning, but nothing happened.  If I disabled WiFi on the phone when the problem occurred, the 3G network took over and everything worked.  If I then re-enabled WiFi, the phone wouldn’t reconnect, The only way I could find to get WiFi working was to turn the phone off and on again.  Then WiFi would work for a little while before locking up again.

Our laptops remained happily connected while this was happening, so our home network didn’t appear to have any problems.  Both phones acted the same way, so it was unlikely that either had something broken.  Google searches didn’t turn up any WiFi-specific issues with the iPhone 4.  We brought the phones into the Apple Store to have them checked out and to see if they knew anything that would help, but the only benefit we got from that trip was a look at the new iPod nanos (Cool! – I’ll trade you my 32GB Touch for one!)

Our wireless router is a Netgear WNR1000.  It’s a cheap 802.11n-ish  router that we bought to add WiFi at my mom’s house in Vermont.  When supporting it caused more problems than it was worth, we took the router home and started using it instead of the Actiontec router Verizon gave us with our FiOS service.  It significantly upgraded the quality of our WiFi coverage at home.

The iPhone 4 does a partial implementation of 802.11n.  Apple says it’s 802.11n-capable, but only on the 2.4 GHz band.   Leaving out 5GHZ support makes the iPhone cheaper to build, but more importantly for a phone, it saves space and battery power.  The 2.4 GHz band is used for older 802.11 versions in addition to 802.11n, so it’s the obvious choice.  I couldn’t find out whether Apple implemented support for the rest of 802.11n (MIMO, wider 40 MHz channels, shorter guard intervals, etc…).

The WNR1000 router also only implements a part of the proposed 802.11n standard.  Netgear says it has a maximum data transfer rate of 150 mb/s, instead of the theoretical maximum of 600 Mb/s for 802.11n.  That implies that the box supports 40 MHz data channels and a short GI, but that it only has one antenna, so there’s no MIMO.  The router doesn’t support use of the less congested 5GHz band either.

Sadly, consumer devices that are supposed to “just work”, like the iPhone and the Netgear router, don’t provide enough info to figure out what’s going on when they fail.  There’s no easy way to tell what method the iPhone is using to connect to the router and the router doesn’t even provide a way to check whether any wireless devices are connected, let alone how they connect.

I changed the mode to 65 Mb/s and now WiFi on my iPhone works reliably.  The question that remains is whether the “real problem” is with the Netgear or the iPhone.  I suspect it’s the iPhone, since my Dell laptop was connecting reliably via 802.11n.  The fact that the iPhone needed to be power-cycled to reconnect also indicates that the device is at least partially to blame.  Whether the iPhone doesn’t like 40 MHz channels or a short GI, or whether it’s just more susceptible to interference when using those modes and the 2.4 MHz band is congested, I dunno.  Other people have found that the iPhone 4’s 802.11 performance is limited compared to laptops – it’d be interesting to know why.