I was just starting to mow the side yard when I saw a little brown thing hopping through the grass.  It was a baby robin. 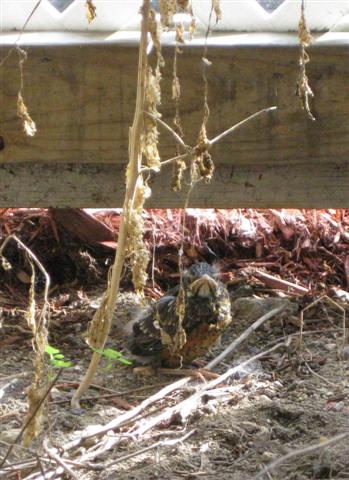 The fledgling wanted nothing to do with the mower, so he hopped through the gate and hid under the front porch.  I showed him to Ruth, and then we looked where I first saw him and found the nest he must have fallen from in a tree on the other side of our fence.

Ruth went online to the Mass Audubon site, and found that the best thing to do was leave the bird alone.  Fledglings like ours, young birds who are fully feathered with a short tail and wings and are able to walk, hop, or flap their wings, often fall or get pushed out of the nest while they’re still being cared for by their parents. If you move them away from mom and dad, they never learn how to find food and water in the wild and how to avoid predators.  So we let the bird be, and I finished mowing while the bird sat on the ledge next to our driveway. 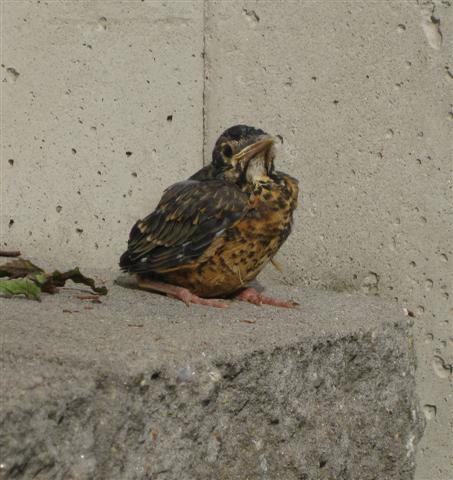 A little later, I went out front and found a woman standing there talking with our neighbor. She was driving by and stopped because she saw the bird hopping along the road. She thought the bird needed help, and she was going to take the bird home and feed it.

I told her that was the wrong thing to do, but she told me she’d done it before, and ignoring me, she grabbed the bird.  An adult bird, maybe a parent, dived on her, squawking, but she ignored that too, carried the baby to her car, and drove off.

Later that night, I went for a run around the Mystic Lakes.  I was still upset with the woman, and I felt like I needed to apologize to all the birds hopping, fluttering, and perching around me for letting her take the baby.

Then I saw a bunny hop across one of the yards as I ran by.  He was followed immediately by another, making it a two bunny day.  Bunnies usually signify a good day, so my hope is that the bunny sighting meant that things will work out for the little bird.

Note:  I read the Audubon article afterwards, and found that it’s actually illegal to relocate birds.  I wish I’d known that when I was talking to the woman.