Recently, Ruth had to get a new sports watch. She was replacing a Timex OVA (Optimum Viewing Angle) watch, which is designed to hold the watch face on the side of your wrist, instead of on top. This is supposedly so you can read it while running without twisting your wrist, saving energy or something. In practice, the only real benefit comes when you’re trying to check the time surreptitiously, in a meeting at work for example, and you can avoid the telltale wrist twisting.

Ruth and I had both had tried an OVA watch, and we both had the band crack within a year or two of use. To make the OVA design work, the band on the watch is molded into a single unit with the watch face, making the band non-replacable. Neither of us liked the idea of throwing away a perfectly good watch just because the band was broken, so we went looking for a normal watch, one with a band that could be replaced.

To our surprise, we found that since we’d bought our last non-OVA watch, Timex had gone to integrated, non-replaceable watchbands on all of their sports watches. Timex sports watches dominate the market. Almost everywhere we went, they were the only ones available. Any alternatives we found were basic models, without the repeating countdown timer that Ruth uses when working out. So we had to choose from the Timex models

I suppose that it might be cheaper to make one-piece watches rather than assembling watches and bands from separate pieces. The fact that this forces you buy a new $50-$100 watch even if the only problem is with the $5 watchband, well, that’s just an unfortunate side effect. Yeah. 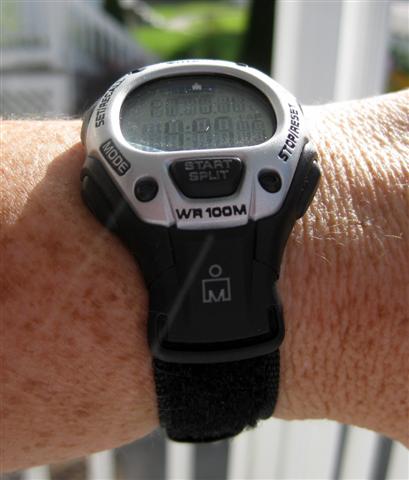 After searching through a few stores for a replaceable band, we gave up when we found an adequate discontinued model at half price. It has a nylon web band.  Hopefully, that will last longer than a year. It would be nice if the watch would last long enough for it to need a new battery.

3 thoughts on “Time for a new watch”