Last week, Ruth and I went to visit Ruth’s mother, who lives in Estero, Florida. They happened to be holding the 4th Annual Turtle Trot 5K while we were down there, so we signed up.

Races start early in Florida to avoid the heat, so we were at the start a little after 7AM, ready to go.  We were joined by Ruth’s brother Matt.

The race benefits Lover’s Key State Park, and is run on trails on the key.  I’m the elbow on the left: 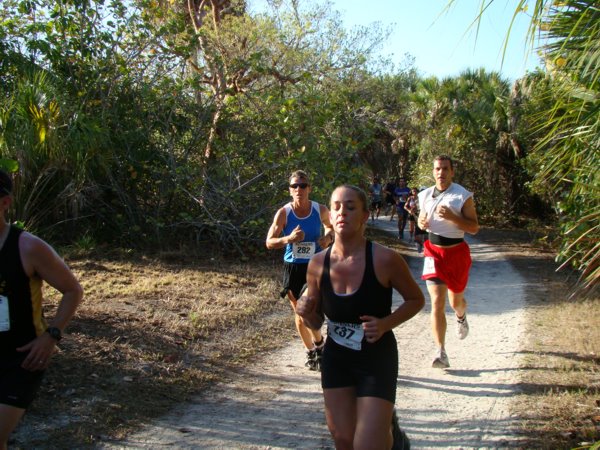 The race felt it was necessary to include a warning in the race packet about a “38 foot mound” that kept the course from being totally flat.   Good thing they mentioned the hill, otherwise we wouldn’t have noticed it.  On the other hand, it was humid and well into the 80’s, the no-seeum’s were out in force, and I had taken most of the previous month off due to an injury, so we weren’t expecting to take full advantage of the flat course.

The race was chip-timed, so the results were up quickly.  Ruth finished in 26:55, 6th of 35 in her age group, and one place ahead of Matt.  I ran a 22:44, which put me third in my group, in line for a medal, so we waited on the beach at the finish for the awards ceremony.  I had my modest face all ready to go.

Unfortunately, while the race was chip-timed, some of the late registrants were hand timed.  When they added in those results, I ended up 4th out of 20. No medal for me.