In 2009, I was the first person to finish the Boston Marathon.  No one will every be able to take that away from me.  I won’t actually win the race (I’m not running this year), but I was the first to finish nonetheless.

Along with three other people, I ran the New Year’s Day Boston Marathon run this morning.  This is the 5th year Gary Allen has come from Maine to run the marathon course while visiting relatives in Boston for the holidays.  This year he got some publicity for the run from Runner’s World, which he hoped would bring a few runners to join in.  Ned Swain came down from Portland just to run, and they were joined by Somerville Road Runners myself and Brandon Villarreal.

Me, Brandon, Gary, and Ned

Saintly, Ruth got up at 4AM to give me a ride to the starting line in Hopkinton.  Brandon had to get someone to cover the last three hours of his shift as a Maynard police officer, but he was successful.  Both of us were there at the start at 6AM as scheduled.  But there was no Gary.  We waited 10 minutes, then decided that we would do the run by ourselves.  Brandon went off to park his car, and while Ruth and I were waiting for him to return Gary and Ned arrived.  Gary had missed the exit for I495 and he had to drive past to the next exit on the Mass Pike, turn around, and head back.

So it was about 15-20 minutes late, with the sky was just beginning to lighten a little in the east, when we took off. 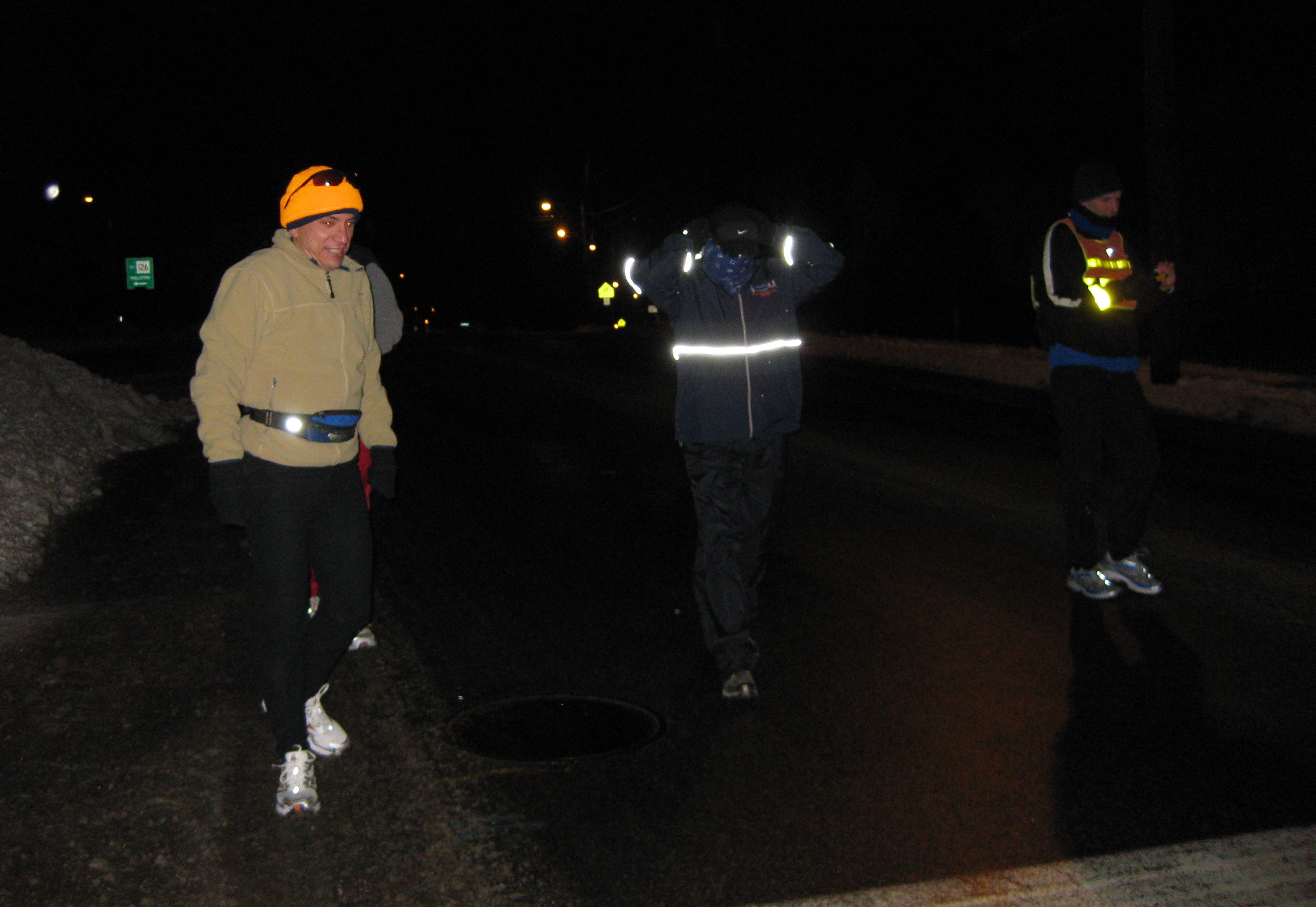 It was cold, about 3 degrees, and windy.  Luckily, for the most part it was a tailwind.  Every once in awhile, the wind would change direction and we would be reminded that things could be much worse than they were.

The sun came up, and we settled into the run.  The roads were in pretty good shape in spite of the previous day’s snow, and for quite awhile they were essentially clear of cars.  As we proceeded, Gary insisted on following the actual marathon course, so from time to time we’d weave back and forth, following the tangents.  At about 10 miles, he noticed that he’d accidentally turned off his watch.  We decided that a starting time estimate of 6:20AM would be close enough.

We passed the time the way runners usually do on long runs, by sweating (with the sweat freezing upon contact with the air) and talking about running.  Gary had stories for every section of the course, while I dragged out some old warhorses for a new audience.   Gary’s toughest part of the race is the section between Wellesley College and the Newton hills.  He feels that after the burst of energy you get from the coeds goes away, it’s hard to focus on the moment when you’re anticipating what is about to occur as you climb to Heartbreak.

As we were climbing the hills on Commonwealth Ave., a woman passed us heading up the frontage road.  Gary and Ned couldn’t have that, so they pushed the pace to keep up.  Brandon and I trailed along behind, then started our own push after reaching the top in order to catch up, which we did by Coolidge Corner.  These surges, if you want to call them that, came back to haunt us soon thereafter.  Brandon slowly dropped off as we headed towards the finish, though he continued to make steady progress.  When we got to Kenmore, Ned ran out of gas and in spite of the effect the cold would have on his sweaty body (it was still only 7 degrees according to the last bank we saw), he slowed to a walk.

Just then we were hailed by Steve Vaitones, USATF official and another SRR member.  He had been running back and forth on the course from Newton Center, looking for our group.  He joined us and Steve, Gary, and I trotted on.  We turned onto Boylston St. and were headed towards the finish when Gary decided it would be a good idea to head back to check on Brandon and Ned.  I was ready to stop, so I continued on with Steve, running over the strings of beads left on the road from the previous night’s celebration.

We crossed the finish line, making me the first person to complete the Boston Marathon in 2009 (yay!).  It took about 4 hours to run the course.  Steve and I stood at the finish, waiting for Gary and the others to arrive.  Almost instantly, my sweaty clothes cooled and standing outside became an unpleasant proposition.  Brandon and Gary came in, but there was no Ned.  Finally, we headed back down the course, into the wind, and we found Ned in the Boylston St. Starbucks.  Brandon left, as his ride was there to take him back to Hopkinton to get his car.  The rest of us refueled and talked some more, stalling before heading back out into the cold.  One woman in the store had the Boston Globe, and we saw that the top article in the Metro section was a story about the run.

Finally we put our cold, soggy clothes back on and left.  Gary and Ned headed to Gary’s mother-in-law’s on Clarendon St.  Steve and I jogged to Copley Station.  From there, Steve took the T to Newton for his car, and I headed back to Arlington.

If you want to take your shot at being the first person to finish Boston, Gary should be back next year.  It’ll probably be warmer!

3 thoughts on “Victory, I’ll call it that”