I’ve been spending time in North Station lately, since I’ve been riding the commuter rail between Boston and Ruth’s place in Haverhill. 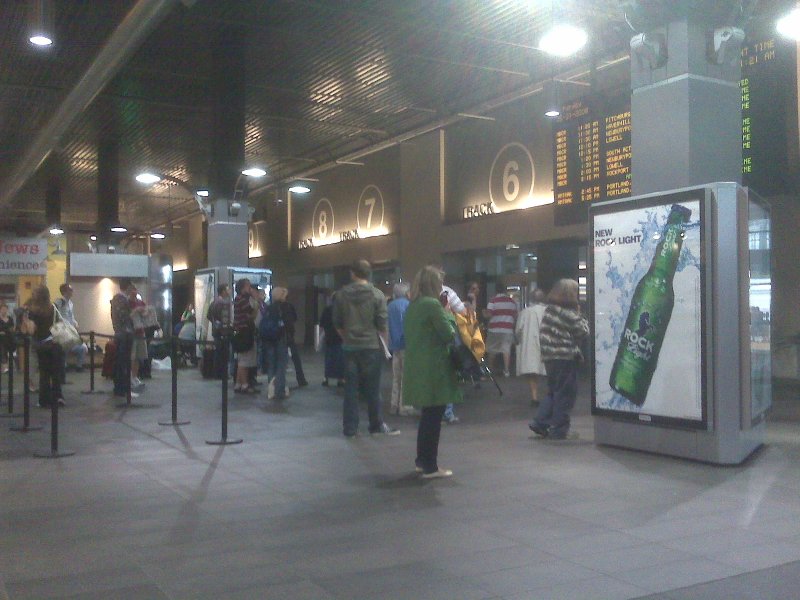 Recently, they’ve finished remodeling the train station.  For some reason, they chose a color scheme dominated by various shades of grey.  It’s an odd choice.  The dull appearance doesn’t make arrival something to celebrate, nor does it help alleviate the tedium of waiting for your departure time.  It’s like they just gave up.  No one wants to be there anyhow, why try to make it appealing or interesting?

They do have a few diversions in the station.  If you choose, while you’re waiting for your train you can get in a line and wait to get some money from the ATM.  Once you’ve done that, you can wait in line for food, or wait in line to buy tickets for a trip or to an event.

Who knows?  Maybe the grey was chosen to emphasize the difference between the waiting area and the excitement of the events in the attached New Garden.  But all the ‘color’ really does is make the enormous open space literally cavernous.  A stalactite or two and the look would be complete.

But it’s not a total loss.  The station does have two Dunkin Donuts stands!
This is the first in what might end up as a series of posts based on images captured with my cell phone camera (what an original idea!).   Don’t forget – you can keep up by using the RSS feed!