Courtyard by Marriott has built a hotel in Burlington next to the Hilton. It’s even closer to the start of the race. And probably cheaper.

The National Running Center booth at the expo has some decent prices. Tim Ritchie (SHS ’79 classmate) runs a good shop.

When there isn’t a cloud in the sky, wear sunscreen. The VCM course has little shade. 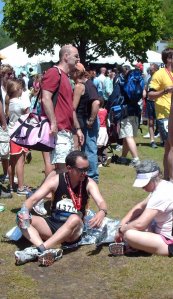 Don’t make fun of someone wearing a long sleeved white wicking shirt on a sunny day when you’re wearing a black singlet with no sunscreen.

The white sun hat with the neck shade does me no good when I leave it at home. Brown hair does not reflect heat.

Blisters on my feet often feel better after they break.

Water is easier to manage than Gatorade, so it spends less time in the sun at aid stations.

Counting cadence as I run does help push me forward when my mind is telling me I can’t go on.

If I overdo it during a race in the heat and I’m dizzy and short of breath while standing around afterwards, it’s a good idea to lie down.

On a sunny day, it’s dumb to lie down on a reflective blanket.