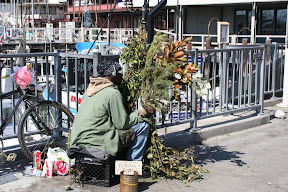 Ruth and I were eating at Joe’s Crab Shack overlooking Fisherman’s Wharf in San Francisco (get the crab nachos and the BBQ crab bucket). Our food had just arrived when we saw a man sit down on a milk crate on the sidewalk in front of the restaurant.  He had a couple of bundles of leafy branches with him.  When he had the bundles arranged to his satisfaction, he used them to hide himself.  Unwary tourists would approach what appeared to them to be a small bush.  As they got to the bush, it would suddenly split, and with a grunt the man would appear.  This startled the tourists, resulting in endless amusement for Ruth and I.  It also generated cash for the man, sometimes from the people he startled, but more often from the crowd of onlookers. 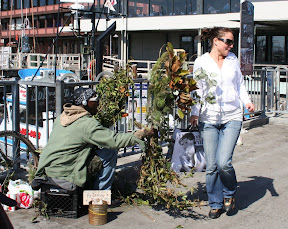 Turns out this was the World Famous Bushman.  He’s been doing this since 1980.  I suppose if he started out today, he’d be the “World Famous Foliage-American”, but people were less sensitive back then.

As we were leaving the restaurant, Bushman went off on a break, leaving his equipment behind.  By the time we finished wandering around the wharf, he’d returned to action, so we got to take a few pictures. He makes as much as $60,000 in a good year, so I guess he can afford to slack off.

One thought on “Bushman!”