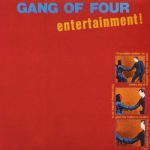 If you could only choose a few albums to bring to the proverbial desert island, which ones would you choose? I set some rules for my list: 10 items, no compilations and only one album per artist. Feel free to follow the rules or not when making your list.  Pick 10 KISS albums if you want.

These aren’t actually the albums I’d bring, since I can play them all in my head any time I want. These are a list of the albums that I’d try to convince you to bring, albums that had the greatest impact on me, when I first heard them or over time. In no particular order:

Others on the bubble:

I have this theory that if you have this list from someone (or a similar list of their favorite songs) you can make a good guess as to their age, based on the idea that a person’s favorite music is what they liked when they were college age. If I had actually graduated from college in four years (my mother would have been so proud!) it would have been in 1983.  The average release date of my top ten is 1984. It drops to 1983 if you include the 15 albums on the bubble.

One thought on “Desert Island Discs”