I follow Jim Connelly’s “Certain Songs” on the Medialoper blog. Jim is close enough in age and musical taste to me that I usually find the posts interesting, and occasionally he points me at something great that I missed back in the day. 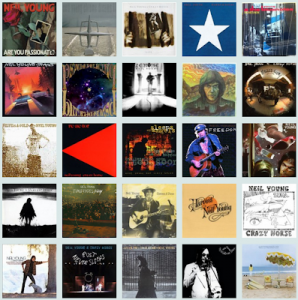 Today’s post was yet another ranking of all of Neil Young’s albums. (Others are not hard to find.) I was surprised to find that Jim’s list  didn’t come close to mine. (Ragged Glory at #3? Anything from this century in the top 10?)(note: Jim’s revised list now has RG at #5 and the highest ranked 21st century album at #12.)

Anyhow, I decided to make one of my own, using Jim’s criteria for which albums to include (No live albums, unless they’re live recordings of new material, no bootlegs, nothing with Crosby, Stills or Nash, no compilations or film soundtracks), since that meant I could just copy his list of albums.

So here’s my list, broken up into groups of albums of similar quality. The ordering of the groups is for the most part definitive, but specific rankings within those groups might change depending on when you ask. (For example, three weeks after I first posted this, I came back and moved Ragged Glory and Sleeps With Angels up two groups.)

Best of the Best:

Rest of the Best:

Best of the Rest:

Only because it’s Neil: (Gimmicky, but…)

Even though it’s Neil: (aka “Not worth ranking”)

5 thoughts on “Yet Another Ranking Of Neil Young’s Albums”