The Boston Marathon is one of the few races that require most runners to beat a qualifying time to get in. Some runners do that on their first attempt, while others struggle for years, hoping that hard work and slower qualifying times for older runners will help them succeed. Boston Marathon qualifying (BQ) times for men and women drop by 5, 10, or 15 minute steps in five-year intervals to adjust for age.

The 2015 WMA/USATF age-grading tables for marathon runners represent an even higher standard, not just “good enough to run Boston”, but “world record holder”. Those tables are created using the current best of the best, the fastest anyone has run a marathon at any one age. Age-grading formulas use these standards to compare runners of different ages on a more level playing field, assuming that the data represents the changes due to age for a typical runner.

I thought it might be fun to compare them: 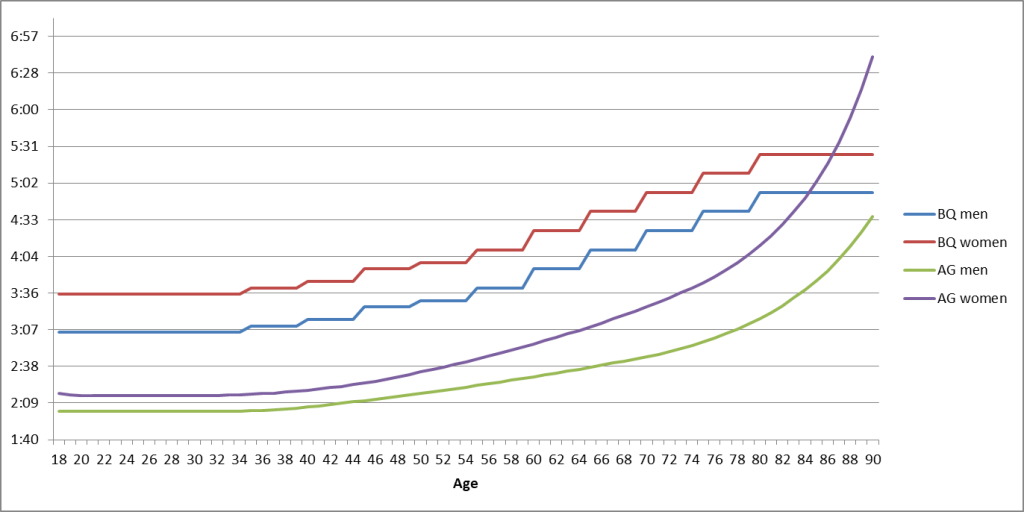 If you look at the data sets by gender, the men’s BQ times are always 30 minutes faster than the women’s at every age. Meanwhile, age-standard times for men and women start out a bit under 15 minutes apart, and then separate with age, with the women’s curve slowing faster than the men’s. So while the curves change with age in a similar way, the relationships between them change as runners get older.

The data can be used to calculate the relative difficulty of qualifying for Boston by gender and/or age.  The closer the BQ time is to the age-standard time, the harder it is for a typical runner to achieve their Boston qualifier.

I decided to simplify taking a closer look by assigning a number to each gender/age combination using age-graded scores for their BQ times. The jagged lines created by using the actual values for each year imply a precision that doesn’t actually exist, so I smoothed out the curves with Excel (using a 6th order polynomial): 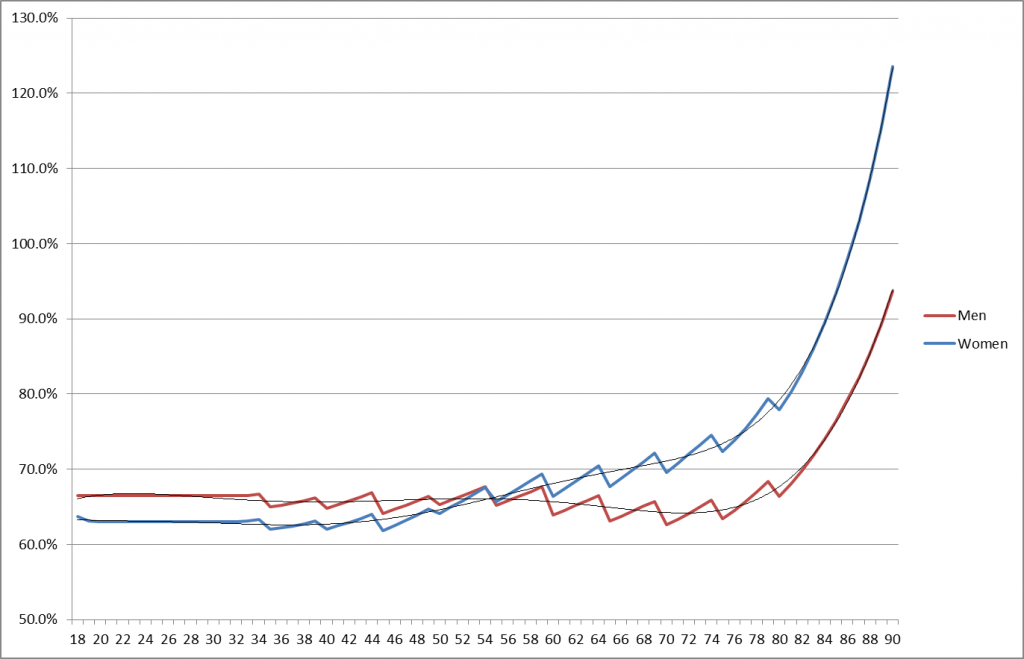 The higher the age-graded score (expressed as a percentage of the standard time for that age) is, the more difficult the BQ time. In general, qualifying gets harder as you get older, but the women’s curve has a steeper climb. If you look at men only, the 70-75 age group has it easier that the rest. And women have it easier than men until about age 55.

Keeping all that in mind, who has the easiest route to a Boston Marathon qualifier? It’s women in their late 30’s, followed closely by men in their early 70’s. The lowest scores for any one year are for 45-year old women and 70-year old men.

On the other hand, the very oldest runners have to set records just to qualify. That’s inevitable, unless the BAA gets permission from the cities and towns along the course to keep the course open even longer than they do now. But the oldest runners are an edge case – there just aren’t that many 80- or 90-year-old marathoners.

Of course, we’re making plenty of assumptions here. Probably the largest is that the age-standard tables represent the aging curve for a typical runner, even though the runners who establish these standards are anything but typical, and few runners stay at one level across an entire career.

Also, we’re assuming that those standards accurately represent peak performance across the entire age span. It might be that women really do lose ground faster than men as they age. But relatively few women compete in the later age groups.  It seems more likely that the standards for older women are ‘soft’, and we’ll see the standards get tougher when more women from the running boom eras age and start to challenge them.

Or maybe, since there are relatively few older runners of either gender, a few outliers (cough*Ed Whitlock*cough) could have an inordinate effect on one of the curves.

Does this mean Boston Marathon qualifying standards are right or fair? Who can say? Anything other than straight time qualifying inevitably involves making subjective choices about who gains and who loses. Remember that this is the fast end of the distribution curve. Relatively few runners come close to qualifying, and even fewer make it.

And you may not be typical. As the late George Sheehan famously wrote, “We are each an experiment of one.”

You can find more number-crunching articles for runners, along with other fun, in my book, Idle Feet Do the Devil’s Work.

6 thoughts on “Which Age Group Has the Easiest Boston Marathon Qualifying Time?”