Today was the day I was supposed to get back to serious training, but it didn’t work out that way. When I woke up this morning, my calves had improved a little more, but they were still sore. Doing my planned hill workout didn’t seem like a good idea, but I thought I’d be OK running along the bike path to Fresh Pond and back instead.  That’s a mostly flat, seven or eight mile run that would be easier on my legs. The six or seven miles of climbing I did at Lake Winnie on Saturday would have to be enough to make up for missing my last set of hill repeats on Packard Ave.

When I started jogging my calves felt tight.  I told myself they’d loosen up after I warmed up. I slogged carefully along, concentrating on my form so I could keep my legs relaxed and let gravity do most of the work of moving me forward.  My calves continued to nag at me, but I kept on plodding, determined that I would at least get my miles in. 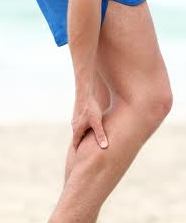 A little more than 2 miles into my run I started to climb a bridge over some railroad tracks.  The extra tension moved the needle on the discomfort-meter from “annoying” to “painful”.  I decided that it would be a good idea to cut the run short and turn back home.

I thought I took it easy enough at Lake Winnie so I’m surprised, and more than a little disappointed, that I’ve had this problem.  But my calves are improving steadily, so if I stay patient I should be fine. I’ll just keep telling myself that.

In effect this is turning into a rest week, and I have a real rest week scheduled for next week. Two weeks should give me plenty of time to recover.  After that, I’ve got five weeks to go before the marathon, ample for the training I still want to do. I’ll just keep telling myself that.

Unfortunately, I don’t really have two entire weeks to rest. The problem is that I’m supposed to race six miles at the Josh Billings on Sunday. If my calves are still sore, normally I would just skip the race and eat the entry fee. But I’m doing it as a relay with my friends Mark and Dave. We’re all traveling to the Berkshires with our wives for the race and we’ve all made reservations for lodging that can’t be cancelled at this late date.  It was my idea, so as long as I can run at all dropping out isn’t an option.

The smart thing to do would be to jog through the race.  It’s not like we’re going in with any illusions about winning, but I’d still feel like I was letting Mark and Dave down. I know they’d understand, but that doesn’t make it any easier.

Last weekend, while Adena and I were sitting in the car waiting for Shaun at Lake Winnie, Adena mentioned a magnesium supplement called Natural Calm that helps her sleep better.  I figured I’d give it a try, so yesterday I bought the “Plus Calcium” version at Whole Foods. The initial results were encouraging. I went to sleep about 10 o’clock and I didn’t wake up until I got up to go to the bathroom at 3 AM. I was still half-asleep, and I probably would have gone right back under once I returned to bed except that lately Felix the cat seems to take any movement on my part as an invitation to play.  He’ll settle down temporarily, almost long enough for me to get back to sleep, before he decides that he needs more attention.  Last night he kept at me for more than an hour before I woke up enough to throw him out of bed firmly enough to let him know I meant it.

The magnesium powder is also supposed to help prevent cramping.  Maybe I should just be grateful that my calves didn’t totally seize up at Lake Winnie. A good strong cramp tears the rest of the muscle and takes a long time to heal. So I should count my blessings, be patient, and hope for the best on Sunday.  I’ll just keep telling myself that.